At its heart, Taking Shape raises fundamental questions: How do we study abstraction across different contexts, and what modes of analysis do we use? Looking critically at narratives of mid-20th-century abstraction, the exhibition rethinks art-historical canons and expands conversations around global modernisms.

Programs are open to all, on a first-come first-served basis. RSVPs not required, but appreciated.

The Block Museum of Art acknowledges support from the Illinois Arts Council Agency.

About the Program Participants

Sultan Sooud Al Qassemi is a columnist and researcher on social, political, and cultural affairs in the Arab Gulf states. Al Qassemi is also founder of the Barjeel Art Foundation in Sharjah, UAE. He was an MIT Media Lab Director’s Fellow from 2014 to 2016, a practitioner-in-residence at the Hagop Kevorkian Center for Near Eastern Studies at New York University in spring 2017 and a Yale Greenberg World Fellow in 2018. Al Qassemi was a visiting instructor at the Council of Middle East Studies at Yale University, the Center of Contemporary Arab Studies at Georgetown University, the American University of Paris, the Islamic Civilization and Societies programme at Boston College and the School of Public Affairs at SciencesPo, Paris. In the Fall 2021 Al Qassemi was appointed as Kuwait Foundation Visiting Scholar, Middle East Initiative at the Harvard Kennedy School and Lecturer, School of Arts and Sciences, Brandeis University. In the Spring of 2022, he was Adjunct Professor of International and Public Affairs at Columbia University. Al Qassemi, along with Todd Reisz, is co-editor of Building Sharjah (Birkhäuser, 2021).

Suheyla Takesh is a curator and writer. At the Barjeel Art Foundation, she works on research and curatorial development of exhibitions, and oversees the production of publications. Her writing has appeared in peer reviewed journals including Thresholds, Rutgers Art Review, and Journal of Contemporary Iraq & the Arab World. Suheyla holds a master’s degree (SMArchS) from MIT’s department of History, Theory and Criticism of Architecture and Art, where she was a student in the Aga Khan Program for Islamic architecture. She is the co-curator of Taking Shape: Abstraction from the Arab World, 1950s–1980s (2020), and co-editor of the eponymous volume of essays.

Rebecca C. Johnson is Director of the Middle East and North African Studies Program and Associate Professor of English at Northwestern. She is co-appointed in the Department of English and the Alice Kaplan Institute for the Humanities, and is a core faculty member of the Comparative Literary Studies Program. She serves as Associate Editor of the Journal of Arabic Literature. Professor Johnson is a scholar of comparative literature with a specialization in modern Arabic literature and literary culture. Her research focuses on literary exchanges between Arabic and European languages in the 19th and 20th centuries, the history and theory of the novel, and studies of transnational literary circulation and translation. Her first book, Stranger Fictions: A History of the Novel in Arabic Translation, 1835-1913 (Cornell University Press, 2021), theorizes a cross-linguistic history of Arabic literary modernity by tracing the production and reception of translated fiction in the first decades of Middle Eastern novelistic production. Stranger Fictions argues for a new transnational history of the novel that places translation at its center, showing how Arabic translation techniques yielded sophisticated comments on the history and formal composition of the novel as a global genre, which was itself shaped by the inequalities that structure cross-cultural communications during the age of Empire.

Caroline Kent received a B.S. from Illinois State University (1998) and an M.F.A. from The University of Minnesota (2008). Kent’s work has been exhibited in institutions such as The Guggenheim Museum, NY; the Berkeley Art Museum and Pacific Film Archive, CA; The Museum of Contemporary Art Chicago; The Walker Art Center, MN; The DePaul Art Museum, Chicago; The California African American Museum, LA; The Flag Art Foundation, NY; The Suburban, Oak Park, IL; and the University Galleries of Illinois State University. Kent has received grants from The Pollock-Krasner Foundation, The McKnight Foundation, and The Jerome Foundation, and was selected as a 2020 awardee of the Artadia Foundation Chicago. Kent’s work is a part of numerous public collections including the Berkeley Art Museum and Pacific Film Archive, CA, the Walker Art Center, MN, The Art Institute of Chicago, IL, the New Orleans Museum of Art, LA, the Dallas Museum of Art, TX, and the Minneapolis Institute of Art, MN, among others. Kent is an Assistant Professor in the Art, Theory, and Practice department in the Weinberg College of Arts and Sciences at Northwestern University, Evanston, IL. She lives and works in Chicago, IL. (Photographer credit : Smeeta Mahanti)

Sarah Dwider is a doctoral student working on 20th century art from the Middle East with a focus on modern art in Egypt. Her research interests include Cold War-era cultural diplomacy and state cultural policy, social realism in the Arab world, and the role of Middle Eastern artists within transnational and transregional networks of exchange, particularly between Socialist states. Sarah received her BA in Art History and Middle Eastern Studies from Swarthmore College and her MA in Art History from the University of North Texas. She is the Block Museum 2021-22 Graduate Fellow.

Hannah Feldman is Associate Professor of Art History and core faculty in Middle Eastern and North African Studies as well as Comparative Literary Studies, as well as affiliated faculty in Art, Theory, and Practice. Her first book, “From a Nation Torn,” argued for the impact the War for Independence of Algeria had on the formulation of mid-century models of aesthetics and vision. She is currently working on two books, one about the Lebanese artist Walid Raad and the historiography of contemporary art, and one about the institutionalization of art as a means of politics in the early years of the Algerian Republic, 1962-64. She is also preparing for a major retrospective of Huguette Caland, an artist included in this exhibition, for the Reina Sofia Museum in Madrid. 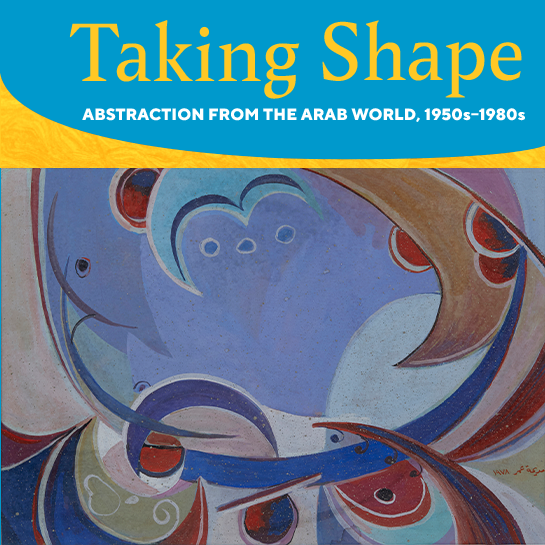 From the 1950s through the 1980s, painters and sculptors throughout the Arab world explored the challenges and possibilities of abstraction in art. “Taking Shape”, an exhibition of works from the collection of the Barjeel Art Foundation in Sharjah, United Arab Emirates (UAE), presents the work of Middle Eastern and North...